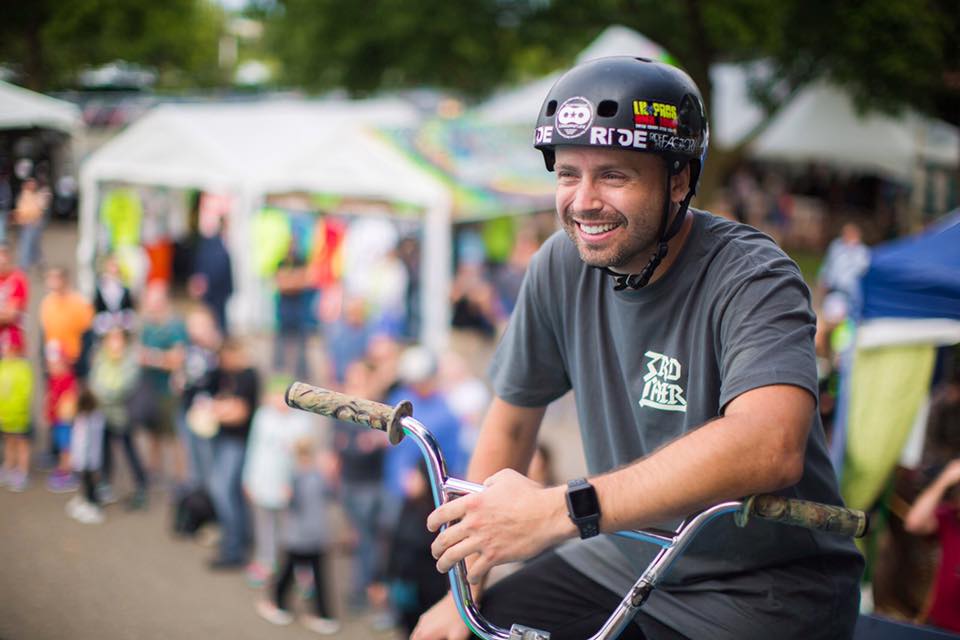 After being clotheslined by a mailbox at age 3 while learning to balance, to getting his first BMX bike at age 13, Dustin starting performing at America’s largest State Fair at age 16 for over 10 years, and entered his first professional BMX contest at age 21. Dustin has competed in Dew Tour, ASA Triples, FISE in France, Baltic Games in Poland, Simple Session in Estonia, and won his first contest at age 26 in Las Vegas followed by another win later that year in Arizona. Dustin made the front cover photo of BMX Plus Magazine at age 27, and also performed in Travis Pastrana’s Nitro Circus in Minneapolis at age 28. Little did he know that 15 years later, he would have traveled with his bike to more than 20 countries worldwide.

After more than 15 years of experience performing in stunt shows all over the country, Dustin started to take over the microphone as the Mega Jump Action Sports Experience’s primary announcer for more than 6 years now. He has been on the mic in front of clients such as the Minnesota Vikings at US Bank Stadium, WNBA’s Minnesota Lynx, Delta Airlines, local Cub Scouts, and the Minnesota State Fair, and now a hit at local schools. He has also been sub-contracted for nearly 10 years now to perform in ASA High School Tour’s Anti-Tobacco and Anti-Bullying campaigns all over the country. Dustin looks forward to meeting you and scheduling your event.
[/av_textblock]

[av_textblock size=” font_color=” color=”]
Our Introductions & Our Story (5-10 Minutes)
We love sharing our story, and the best part is tricks are mixed right in… We also always talk about important helmet & bicycle safety throughout our story.

Our Demonstration & BMX Stunt Show (10-15 Minutes)
Dustin brings his bikes to all events to show the kids tricks right there on the flat ground. Simple tricks that we all learned right at home in our driveway… The “Bunny Hop”, the “Endo”, the “Wheelie”, the 180 and 360, and even riding the bike backwards called the “Fakie”. Worried about tire marks ? If any are left we rub them right off afterwards, we can give you any school gym references needed.

Our Grand Finale (5 Minutes)
Every show needs to end with a Grand Finale right ?? We end our shows with a very”epic” finale by jumping over a someone on the flat ground… This a very fun & dramatic skit for all of the kids. We can even jump over a staff member at school or Cub Scout leaders.

Meet & Greet and Free Autograph Cards for Everyone (5-30 Minutes)
After the kids roar & cheer after seeing the epic finale jump, Dustin invites them all over to meet each other:) Dustin signs brand new autograph cards for everyone!
[/av_textblock]
[/av_two_third]